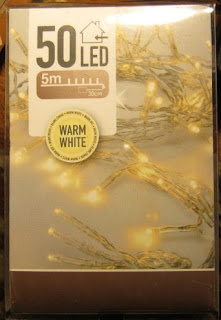 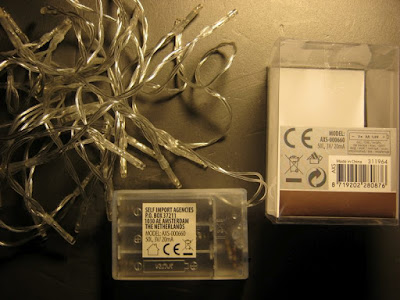 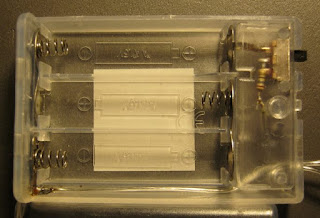 When powered from 3 NiMH cells this draws ~60mA. When powered from 2 NiMH cells (one pair of battery contacts shorted) - about 2.5mA, with very low light intensity.
These lamps have nominal parameters specified as 3V/20mA, but it does not make much sense with battery holder for 3 cells.
I have to warn that this one was dead on arrival with cable not soldered to contact. Quality control might be not perfect, but it is still great value if you have soldering iron prepared.
As improvised power source I've used old Nokia charger (ACP-7E) with additional diode and 27Ohm resistor in series.
Posted by T.O. at 21:27 No comments:

Fixing "The Application was Unable to Start Correctly (0xc000007b)" error 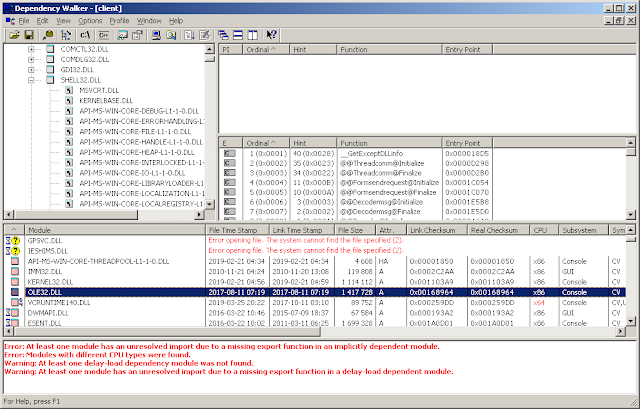 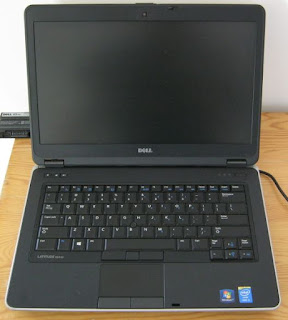 Keyboard: from my perspective worse than in T500. Finding F5 of F9 without looking would not be easy. No separated Del/Home/End/PageUp/Down block. Similar, yet somehow less intuitive cursor block indentation. The problem is no one if making "proper" keyboards since T420/T520. On a plus side: separated volume up/down buttons - something that is missing in T440/T550 (equivalent generation from Lenovo).
One pretty annoying thing is squeaky sound from right Shift button - I'm guessing this button might be slightly too wide for used mechanism. 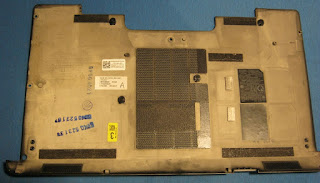 Bottom cover is made from metal, but when detached it is rather thin and flimsy - this is not like T500 back cover that could basically be skeleton. It is held by 4 screws (3 on the HDD/left side and in the center) and - at least on my unit - it does not fit perfectly on right side. I wouldn't mind few extra screws. 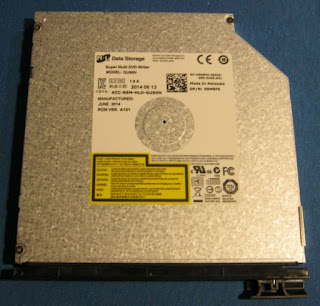 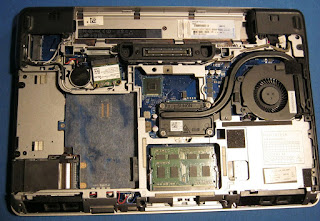 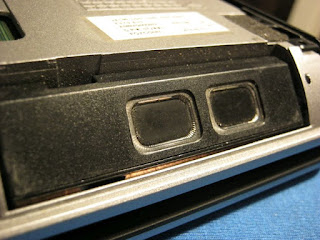 Rather weird looking speakers, with two membranes each. Magnets are quite strong and they are catching metal dust. One annoyance related to built-in speakers is pretty loud pop sound each time integrated amplifier goes to active state. Fortunately I'm not observing this when using active speakers connected to headphone output.
The good: battery life at low backlight level seems excellent - for my 48Wh (effectively) battery work time is estimated as 9 hours.
It is very easy to recover Windows - Dell supplies tool that creates bootable USB.
Buttons for trackpoint are disappointing (buttons below trackpad are OK) - they need to be pushed all the way down but they are flat and have no tactile feedback.
My previous laptops were Thinkpad R500 and T500 and comparing to them E6440 seems little loud and hot - fan is spinning in situations when it was idle on thinkpads. Currently I'm using ThrottleStop I'm experimenting with undervolting using ThrottleStop with voltage offset -100mV for CPU Core, Intel GPU and also for CPU Cache. This might be helping a little, but R500/T500 still were better.
Display viewing angles are poor, but on the plus side there is no visible flickering starting from third (out of 16) level of brightness. Brightness is also noticeably higher than on '500 series thinkpads.

Note: to get service number run wmic bios get serialnumber 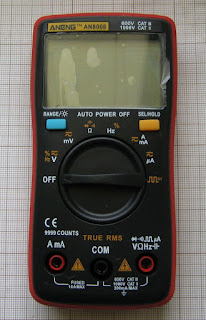 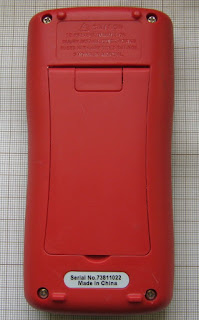 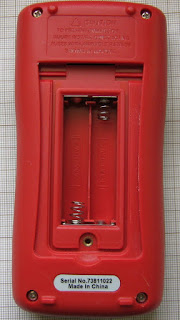 Bottom part looks like rubber holster, but it is actually single piece of plastic. 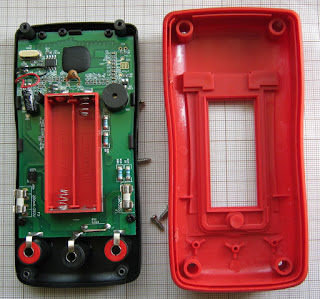 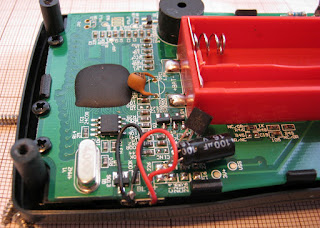 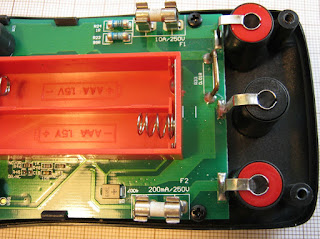 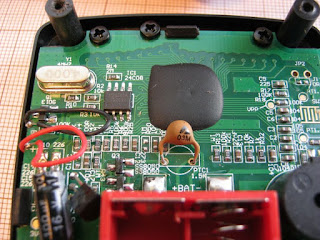 24C02 - most likely for calibration storage. 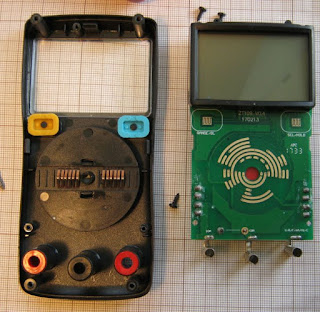 PCB markings: ZT109 V0.4 170213 => http://zotektools.com/products-2/zt109/
Range switch is not the best I've seen.
Buzzer is latching and reasonably quick, but personally I would prefer "analog" one.
My other complaint would be rather poor display visibility when looking from angles above it (from below it is fine).
Note: auto power off can be disabled by holding SEL/HOLD button while powering on. Multimeter would still beep after each 15 minutes or so as when auto power off normally would be about to trigger.
Posted by T.O. at 17:21 No comments:

APM (Advanced Power Management) feature is quite problematic for my 2.5" laptop disk - 500GB HGST HTS545050A7E680. Depending on disk activity it might unload heads way too often - every minute or so. This is annoying (clicking noise), increases mechanism wear and probably even increases power usage when it semi-randomly parks head just to activate again few seconds later. I have no idea why so short idle time was selected as default in firmware - just an error plus lack of testing or planned obsolescence.
CrystalDiskInfo can be used to disable APM, but it gets little tedious as this has to be repeated each time disk is powered on and requires few clicks each time.
Here is another tool - APMdisable.exe from https://www.codeproject.com/Tips/808412/Disable-APM-for-Hard-Drive-in-Windows. Changing disk parameters require administrator rights - set this in file properties.
To run APMdisable.exe each time disk is powered on I've used Task Scheduler, creating new task triggered by "On workstation unlock of any user" event - as described on https://superuser.com/questions/15596/automatically-run-a-script-when-i-log-on-to-windows: 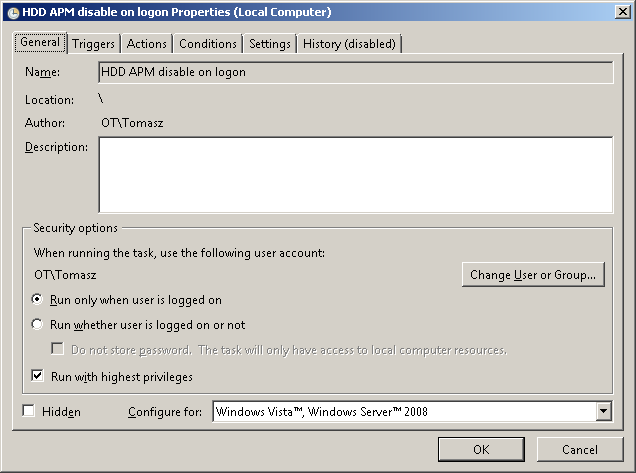 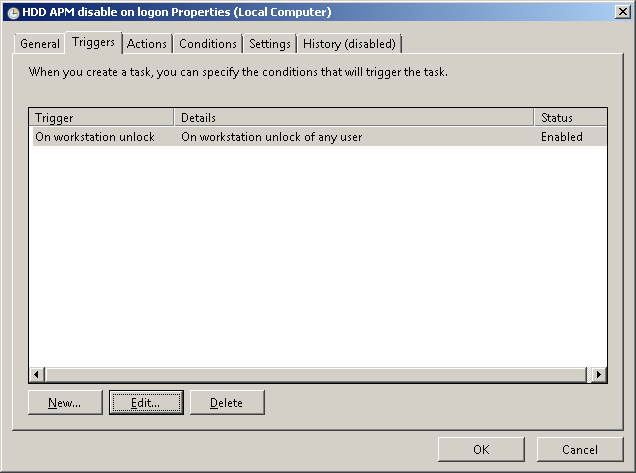 Add also second trigger: "At log on"/"At log on of any user" - apparently logging first time after restart does not count as "On workstation unlock". 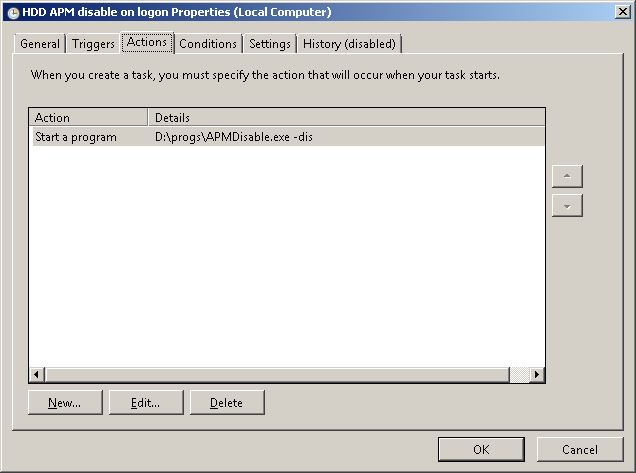 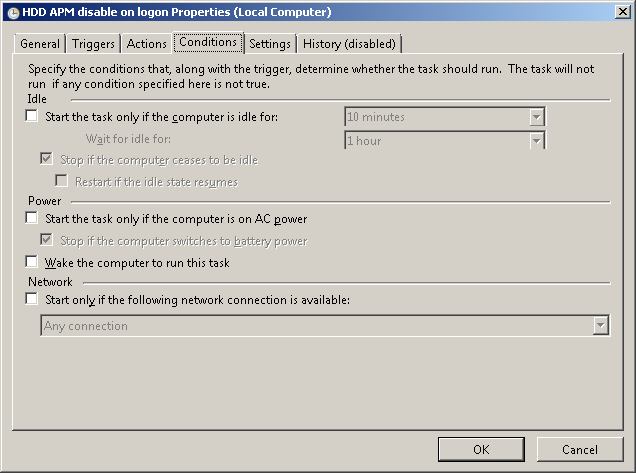 Starting both when using battery and AC power.